I know I’ve dedicated this blog to the Love of Golden Retrievers, but after witnessing the carnage first-hand, I just had to write about it.  This seemed the perfect forum in which to share.

Some time ago, a new neighbor moved in next door.  There was a soon-to-be-Mommy and a stay-near-home-Daddy.  They wedged their new home into a spot that I really didn’t think there had been room to build.  But they did it, and it seemed to be pretty sturdy.  Neither rain, nor wind, nor the size of the hail seemed to knock it down.  We never really got a chance to meet the new neighbors.  They kept to themselves most of the time – preferring to hide or take off whenever anybody got too close, so I’ll just refer to them as Mommy and Daddy.  Mommy and Daddy got busy and it wasn’t long before the twins were born.

From our viewpoint, they seemed to be fairly dedicated parents.  They took turns feeding the kids.  One would stand guard while the other fed them.  After dinner each night, Daddy would disappear into the darkness and wouldn’t reappear until shortly after the sun rose above the horizon the next morning.  And then their routine would begin again.

For as protective and guarded these two were with their kids, it’s surprising to note that they built their house such that anybody could easily peer into their private lives and watch them as they went about their business.  From our house, we could easily see these parents dote on their kids as they fed them, cleaned them, and brushed the tops of their heads.  But the operative word is guarded.  They guarded their home as if they expected something bad to happen.  They never let the kids venture outside.  They never let them visit with other kids their own age.  Perhaps they had a premonition.  Perhaps they were just overprotective parents.  Perhaps they had brains the size of a pea.  In any case, it was just creepy how they would watch our every move from the safety of the shadows around their home.  Probably just a creepy as they felt when we would watch them.

Then it started.  Last week a small child wandered into our midst.  He stayed for a few hours, playing and frolicking as he went.  But his presence caught the attention of the local troublemakers.  This is never a good thing.  They were on him like flies on dog poop.  Every move he made was met with sharp and decisive blows to the head and torso.  Hearing the commotion I went out to find out what was going on, just in time to save this wee small life from these bullies.  Sadly he died from his injuries a short time later.

Having tasted blood, the troublemakers were in a heightened state of awareness and busily set about patrolling their empire looking for their next victims.  Almost at once they spied Mommy and Daddy bravely going about the business of caring for their children.  Every day the troublemakers would walk their perimeter; Every day they would watch Mommy and Daddy guard their kids.  For most of a week, it was a very tenuous standoff.

Mommy and Daddy won the first round.  But there would be other rounds.  This clearly wasn’t over.  Not by a long shot.

A few hours later, they did return.  And the fear instilled by the first encounter had given way to curiosity and instinct.  Immediately there were screams; there was a flurry of activity.  I was there, witnessing the violent attack first hand. CRUNCH.  A crunch loud enough to have been heard from 20 feet away.  Lots of screaming; CRUNCH; and then silence, except for the screams of Mommy and Daddy.  I moved in closer to get a better look.  I picked up the lifeless body of one of the twins and Mommy and Daddy began circling me, and crying and screeching at me – as if I had committed this horrible act.

Defending myself against Mommy and Daddy’s anger and violent attacks, I swung wildly at the air and hit nothing.  One troublemaker went after Daddy.  Daddy managed to zoom over a fence just as one of the troublemakers managed to relieve him of a few tail feathers.  In the meantime, the other troublemaker had discovered the other twin hiding in the shrubbery nearby.  Another ensuing scream; Mommy was left to defend her baby alone.  One scream followed another, followed another and another.  I pulled the troublemaker off the baby and rescued his nearly lifeless carcass from the troublemaker’s continuing attempts to play with him as if he was one of their stuffed toys.

Here was the perfect, slightly overprotective family;  living, growing, and finally venturing out into the world. 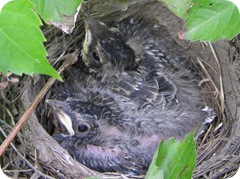 BAM, some crazy madmen wiped out the entire family in a bloody free-for-all that leaves one baby robin dead, one baby robin critically injured and unable to fly, and one Papa robin missing a few tail feathers.  For the next several hours, Mommy, Daddy, and a few of their closest robin friends squawked and carried on as they circled the yard in an attempt to protect their last injured offspring, now safely, relocated by me, outside the fence and waiting patiently the arrival of the coyote pups when darkness falls.  I also moved the dead twin to a spot in the front yard alongside the baby bunny that got pummeled to death earlier in the week. 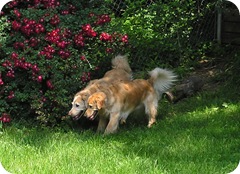 For now, the troublemakers are free to wander and patrol their yard and look for pets from unsuspecting, dangling hands.  Mommy and Daddy Mockingbird are working building their second nest of the season in the top of the rose bush in the backyard.  I guess when you’ve got a brain the size of a pea, intelligence isn’t among your strong suits.  The two troublemakers have been watching the Mockingbirds intently, having injured the couple’s first baby last month as it tried to learn to fly.  And when you’re a Golden Retriever with an instinct for hunting and tracking, you’re only doing what comes naturally.  And then you look for a cool place to lie down, like on an air conditioning vent in the kitchen.